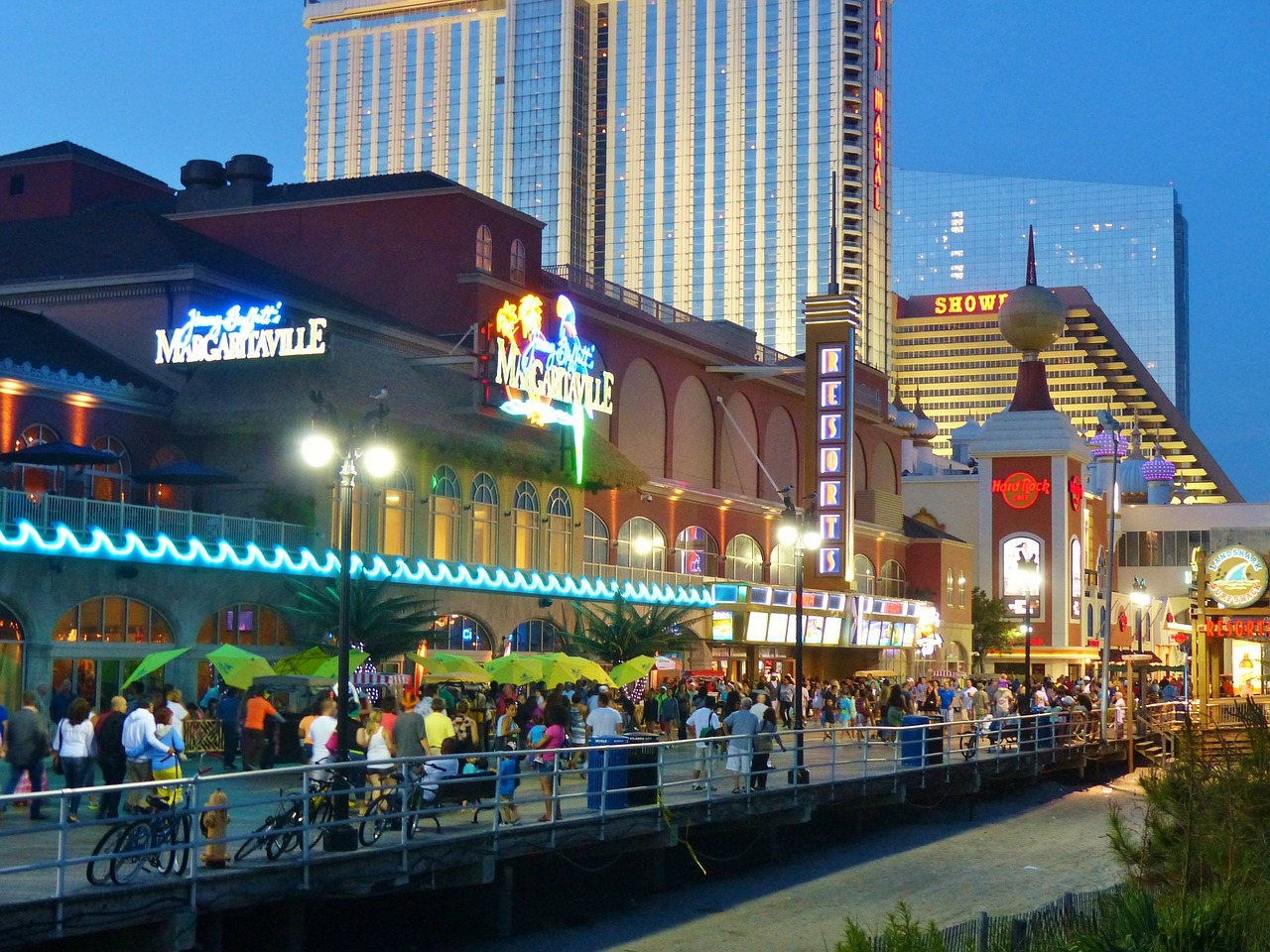 Yeah, all that and more!

When it comes to beautiful white sand beaches, fun and excitement, great food, and dazzling entertainment year-round, New Jersey Shore has it all. It is also the center for gaming and gambling in the East Coast of the US.

Gambling has a long legacy in New Jersey, with the state historically being more lenient of gambling than most other states. There were many lotteries in New Jersey until they were banned in 1844. The lotteries were used to help pay for the military during the French and Indian War and the American Revolution. They were also used to help finance the construction of Queen’s College (now Rutgers University) and the College of New Jersey (now Princeton University).

New Jersey authorizes social gambling too such as workplace football pool and a family poker game as long as the organizer of the game is on equal terms with the other participants, and does not take a cut of the gambling proceeds. Moreover, it is never a crime in New Jersey to be a player in a gambling operation. However, bars and other holder of liquor licenses are prohibited by the New Jersey Alcoholic Beverage Commission from allowing social gambling.

New Jersey’s gambling laws are among the least restrictive in the United States. Legal, in-state online gambling was established in New Jersey in November 2013, and the state is challenging Nevada’s grandfathered federal statutory monopoly on legal sports betting.

Gaming in New Jersey is centralized in Atlantic City. Casinos feature all your favorite slot machines and exciting table games like craps, blackjack, baccarat, roulette, several versions of poker, and many more. All these games provide non-stop action along the Boardwalk and Marina District with each casino providing its own unique theme and flair for hospitality. In addition to gaming, there are countless fine restaurants, shops, nightclubs, and spas in each casino with first-class hotel rooms and suites.

Where else in the United States can you find mega-resorts highlighting the finest gaming paired with excellent entertainment, delicious dining and indulging spas, all within a few feet from a glistening ocean or pristine bay? Whether you’re looking a big hit at the slots, try your luck at poker or enjoy anything in between, there’s always something to turn you on in Atlantic City’s casinos.

Presently, New Jersey has seven casinos and all are located in Atlantic City. In 2011, New Jersey’s casinos employed around 33,000 employees, had 28.5 million tourists, made $3.3 billion in gaming income, and contributed $278 million in taxes. The regulatory bodies of these casinos are the New Jersey Casino Control Commission and New Jersey Division of Gaming Enforcement.

Bally’s Atlantic City opened in 1979, wherein Marlborough-Blenheim Hotel stood on the site before the casino was built. It’s famous for its address of “Park Place and the Boardwalk”, which are locations popularized by the board game Monopoly. With almost 2,000 rooms, Bally’s is one of the largest hotels on the boardwalk.

The moment you arrive at Park Place and the Boardwalk, you know you’re standing on prime real estate. The property is actually several casinos in one, with several gaming floors, thirteen restaurants, and two nightclubs. It has a six-story-high escalator, twin waterfalls, and tropical plants. The focus of nightly entertainment is the “Legends in Concert” series that brings celebrity impersonators to the stage, and sometimes to the tables to deal blackjack. Of course there’s always an Elvis, also Madonna, the Blues Brothers, Adele, Bobby Darin, and a rotating cast of performers.

When you’re at Bally’s, visit the Wild Wild West Casino. It is home to more than 2,000 slot machines as well as many gaming tables. This casino was opened as an expansion of Bally’s. Significant acts appear in the Main Ballroom, and the Park Cabaret Theater highlights a changing line up of amazing and talented superstar impersonators. At Wild Wild West Casino is where you’ll find some of the lowest table minimums in town and a hard-partying atmosphere in beer pong tournaments. 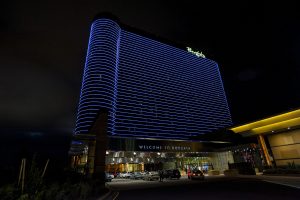 Borgata Hotel Casino & Spa is one of the hottest properties in town, not on the Boardwalk but in the Marina district, way on the other side of the city. It is located in West Atlantic City, and is owned and operated by MGM Resorts International. The 161,000 square feet casino hotel is the largest in New Jersey with 2,010 rooms 3,475 slot machines, and more than 250 table games. It has 12 restaurants including offerings from Bobby Flay and Wolfgang Puck. The property also has two theaters that each seat more than 1,000 people. Borgata is the top-earning casino in Atlantic City.

When it opened in 2003, this billion dollar casino hotel was the first addition to Atlantic City since 1990. It exists on a scale similar to Las Vegas than anything in these parts. The architecture and interior design is a blend of modern elements and old-Italy themes. With its dazzling nightlife and specialty boutiques, Borgata draws in a younger, hipper crowd than the other area casinos. 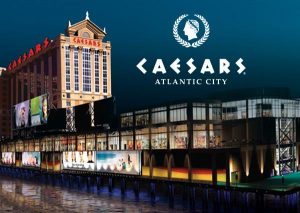 Caesars Atlantic City is a luxury hotel, casino, and spa resort. It stands alone as the premiere destination on the Jersey shore. It has an ancient Roman and ancient Greek theme the same as Caesars Palace in Las Vegas. Caesars is Atlantic City’s second casino and it opened in 1979 as the Caesars Boardwalk Regency. The casino has more than 3,400 slot machines. There was much expansion and renovation in the past decade including a hotel tower, a parking garage, and a shopping center called Playground Pier. The shopping center offer dozens of high-end stores and waterside restaurants.

With luxurious rooms, exceptional service, extravagant amenities, and a location adjacent to the world-famous Boardwalk, it is easy to see why Caesars is the most glorious spot in Atlantic City. This casino offers a variety of table games including Baccarat, Pai Gow Poker, Blackjack, Craps, and Roulette, as well as slot machines.

As far as entertainment goes, it dominates this part of the Boardwalk. Popular musicians and comedians take the stage every weekend at the Circus Maximus Theater. Dance the night away at Caesars Atlantic City’s nightclub Dusk.  Here you can enjoy award winning bottle service and may have a chance of spotting a celebrity. This Atlantic City hot spot spins club music delivered by renowned musician and club co-owner DJ AM. 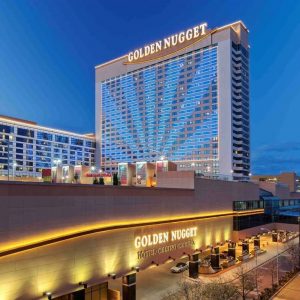 Golden Nugget Atlantic City is a hotel, casino, and marina that opened in 1985 as Trump’s Castle, it was renamed Trump Marina in 1997. Landry’s, Inc. bought the casino from Trump Entertainment Resorts in February 2011, with the sale approval in late May.

The resort is on a 14.6 acres property containing a 74,252 square-foot casino, 728 guest rooms, seven restaurants, a nightclub, a 462-seat theater, a 16,920 square-foot recreation deck with a health spa, outdoor heated pool, hot tubs, cabanas, tennis and basketball courts, and jogging track. The property also has 50,922 square feet meeting and function space, a 9-story parking garage with direct walk-through into the complex, and the 640-slip Frank Farley Marina. The third level is the main area of the resort. Its center is a 210 feet long reception area from which point every amenity such as the casino, ballrooms, restaurants, showroom, or meeting rooms is within a short walk.

Expect non-stop entertainment at Golden Nugget. From the thrills of a blackjack tournament to the excitement of the craps pit, the table games at the Golden Nugget have the hottest action in town! The main casino floor holds almost 65,000 square feet of games including Blackjack, Craps, Roulette, and Mini Baccarat. If poker is your game, this casino offers Ultimate Texas Hold’Em, Flop Poker, 3 Card Poker, 4 Card Poker, Mississippi Stud Poker, Let it Ride Poker, Caribbean Stud Poker and Pai Gow.

This refurbished and rebranded waterside casino markets itself toward a loud younger crowd by engaging mixed martial arts events, rock tribute and cover bands, and bawdy comedians. Dig into steaks at Vic & Anthony’s or take in ocean views and seafood at the Chart House. The casino hotel operates the nearby state marina and is one of the only casinos in town you can arrive by yacht. 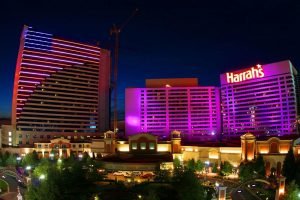 Harrah’s has a distinct, perhaps mellow, vibe compared with the other casinos in town, but it’s not entirely demure. It’s known as a haven for slot players. This casino has more than 112,918 square feet of gaming space with the newest, must-play slots like The Price is Right TM and Game of Life, as well as all reel and video slots. Slot denominations range from 5 cents to $100 for a total of 3,712 machines, including 450 exciting new games in the newly expanded casino floor. The hotel also has several shops and eight restaurants including Dos Caminos and Luke Palladino. It has a large theater where seasoned crooners and comedians grace the stage and entertain an older crowd. 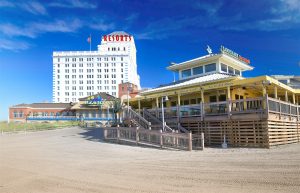 Resorts Casino Hotel was the first casino hotel in Atlantic City, becoming the first legal casino outside of Nevada in the United States. The resort has set the standard for casino gaming and entertainment in New Jersey since its opening in 1978. For a time, it was the world’s most profitable casino. The resort had an expansion in 2004, adding the 27-story Rendezvous Tower. Then it underwent renovations in 2011, converting the resort to a Roaring Twenties theme.

Resorts Atlantic City has an understated art-deco style. Throughout the past years, Resorts has become synonymous with superior service, world-class casino gaming, luxurious accommodations, fine dining, and the biggest and brightest stars in entertainment.

A few unique nightlife venues have first put up their flag here including the city’s first gay dance club, a cocktail lounge with a singing bartender, and a new piano bar. Entertainment at its Superstar Theater ranges from ballet to cage fights. There are also monthly classic car shows outside the casino’s entrance on the Boardwalk. 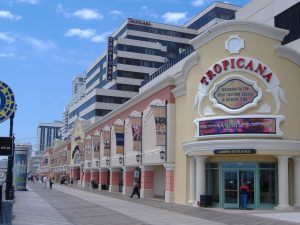 The Tropicana Casino & Resort Atlantic City is one of the largest luxurious hotels in New Jersey with just over 2,000 rooms. Tropicana has more than 3,000 slot machines and 135 table games. The resort also features The Quarter, a shopping mall located in the complex. In 2017, the hotel completed an expansion and renovation that included five free multimedia light and sound shows on the boardwalk, redesigned North and Havana hotel rooms, upgraded casino floor with a new high limit slot area, property entrance on Pacific Ave, Luxe Hair Salon, AtlantiCare LifeCenter Fitness Zone, and Ivan Kane’s Kiss Kiss Nightclub. Part of the expansion are fireworks during the summer on the boardwalk, new restaurant concepts by Chef Jose Garces, upgraded hotel lobby, and buying the Chelsea Hotel.

The Tropicana offers excitement and action, from slot machines to Asian games to table games. Experience the Turf Club, a simulcast club. There is also a large showroom that provides entertainment, as well as the Comedy Stop. Dining and shopping is also available on the premises. The resort also has an IMAX theater that showcases remarkable documentaries and the latest 3D Hollywood blockbusters.

Drop by The Quarter, a vibrantly colored, three-story streetscape that brings to life the exotic splendor of Havana. The Quarter highlights sports bars and live music, and salsa dancing. You can chill at the Missile Bar at Cuba Libre Restaurant and Rum Bar, sing your heart out at Planet Rose Karaoke Bar, and relax in an upscale night scene at Providence.