Anyone who followed J.R. Smith’s basketball career knows that the guard never hesitated to shoot. Sometimes, his selections warranted criticism or begged for an extra pass, but the Freehold native always released, often from downtown, with undisputed confidence.

So it should come as no surprise that Smith believed in himself enough to simultaneously take on two new challenges when his 16-year NBA career came to an end following the 2019–2020 season. The 36-year-old, who had entered the NBA as a teen, enrolled in college for the first time in 2021. Smith was a freshman at North Carolina A&T State University, a historically Black university, last year. There, he began his pursuit of a liberal studies degree and walked onto the men’s golf team.

Smith recorded a 4.0 GPA, proudly adding to a resume that already included championships with the Cleveland Cavaliers and Los Angeles Lakers and a sixth Man of the Year award with the New York Knicks. Over the summer, New Jersey Monthly caught up with Smith at an Icon Series celebrity golf tournament. The former first-round pick discussed growing up in New Jersey, entering the NBA at a young age, going back to school and more.

What was it like for you growing up in Jersey?
J.R. Smith: It was amazing. Between Monmouth, Ocean and Essex counties, it was just amazing for me. [I was] pretty much born and raised in Freehold and Millstone. Between there, Hamilton and Lakewood, those are my neighborhoods.

Any favorite spots?
Vesuvio’s [Pizza in Millstone] was my spot growing up. My grandmother used to actually live in front of Vesuvio’s.

You bounced around high schools as a teen. What ultimately drew you to St. Benedict’s Prep in Newark?
Coach [Dan] Hurley. Being able to have him as my coach really played the biggest part, because I was still a football player. I had more offers for football than I did basketball at the time. My main thing was, if I’m going to go there, I wanted to play both, and I couldn’t play both. It was the biggest sacrifice I made. Fortunately, I listened to Coach Hurley and it panned out.

How did you ultimately realize basketball was your calling? Because you played baseball, too.
I played baseball until my freshman year. Then I started playing for NJ Playaz, travel basketball. It was just so competitive. I was playing every weekend, going to camps and stuff like that…. Basketball was such a nonstop, I couldn’t do anything else at the time. So after, like, my sophomore year, that was pretty much it. That was my decision.

You committed to UNC, but instead of going to college, you entered the NBA draft and went pro out of high school. How did you make that decision at that age?
Basketball was something I wanted to do. I wasn’t ready to go to school. My grades [weren’t] ready. I wasn’t in the mindset to go to classes and stuff like that. So it would have been a toll on me, the whole thing of trying to be a one-year guy or a two-year guy.

You were 19 as a rookie in the NBA. How do you think that transition, straight from high school to the pros, impacted you as a young man?
Oh, so many ways. Being around 35-year-olds, 33-year-olds, grown men who’ve been within the 1 percent for 10, 15, 20 years, celebrities and all of that. It was mind-blowing.

Were you mentally and emotionally prepared for all that at that age?
No, no. Absolutely not. I was still immature at 20, 22, let alone 18, 19 years old. I was able to be immature for a longer period of time, fortunately, because I was able to make mistakes. I had money…. It affected me heavily—negatively, but also in a positive way. I was able to do things for my family and people that I love and see parts of the world that I never thought I would see.

You played 16 years across the country and internationally. Any favorite places that you’ve played in?
Obviously the Garden. Nothing beats the Garden.

Did you like being close to your roots in New Jersey when you played for the Knicks?
I loved it. Playing there was special. I grew up a Bulls fan, but my dad was a die-hard Knicks fan. When I was a kid, we used to watch the games and talk shit back and forth. [Playing there] was one of the pivotal moments in my life.

You mentioned that you made a lot of money. You could be taking it easy in retirement right now, but you went back to school. What motivated you to do that?
Just self-worth. Feeling like I still want to grow. I have so much to do as a person, in so many ways. I can get better. Because I’ll definitely be the first one to say I don’t know everything. And it’s tough when you retire from doing something you love for so long, and then you just can’t do it anymore, or you don’t want to do it anymore. 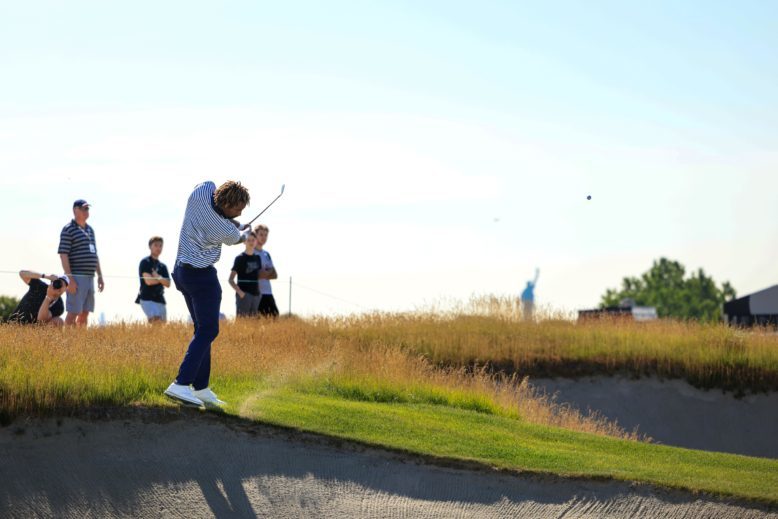 Smith wasn’t ready for college as a teen, so he entered the NBA. Now he’s scoring in the classroom and taking on a new sport. Photo courtesy of ICON Series 2022

You’re in an inverse position compared to when you entered the NBA. What’s it like first going to college in your 30s?
It’s fun. I enjoy learning. I enjoy being able to be vulnerable to learn and understanding I’m in a unique situation, and people understand that. So, whether it be my professors or my tutors, it’s something that I really cherish and appreciated because they take the time to understand my ignorance to certain things. I’m a person who’s willing to learn and wants to know.

You also walked onto the golf team. In the NBA, you were a guy who mostly always had a roster spot locked up. How did you approach having to make a team at this point in your life?
Man, it’s still there. I haven’t made anything yet. But having to make a team is something I enjoy because that’s what I think brings you together, when you compete with your brothers at practice or whatever, and it leads to finals or championships. That’s where it starts. Ever since I was three, four years old, I envisioned myself being the best person on my teams. So when I got to that point, wherever we went as a team, people knew I was the guy on my team. So having that and recreating that is probably the best part of the whole situation.

Where does your love of golf come from?
Not being able to conquer it….You could play the same course 10 times and it can play 10 different ways.

You were North Carolina A&T’s Academic Athlete of the Year for 2021-2022. You had a 4.0 GPA as a freshman. How much did that mean to you?
It meant a lot because, for one, I didn’t even know that was an award. But it means a lot because that’s something I feel like my mother would be proud of. I made her proud. I think about my parents and our family, sacrifices they made for me. I can give them money; I can give them a house and do all those things. But when you have kids like myself—I have four girls—and I see them achieving things on their own, as far as self-worth and what they want to do and how to better themselves, I think that’s the best part about being a parent.

What’s next for you? More golf? More school?
Yeah, I’m going back this fall. My plan is to get my doctorate. I’m trying to better myself in so many different ways. I can impact the world, any youth in the communities, in this golf community, especially. So I’m there until they kick me out.