New Jersey is a great place to spend not just the summer time, but any time of the year when you feel like relaxing and being in a new environment. It has so much to offer for those who travel alone, with friends, a loved one, or even the entire family. Whatever you want, you name it and New Jersey has it. There’s no way you will get bored when you visit the place. All you have to do is relax and enjoy.

On the other hand, if you are a sport enthusiast, specifically in golf, and you worry that your vacation in New Jersey might deprive you of one thing that you dearly love. In this case, you are wrong since as mentioned, name it and you’ll have it.

If you want to enjoy playing golf while on a vacation, then you have come to the right place. New Jersey has got some of the best golf courses to play on. Below are some of them. Check them out and enjoy playing. Be sure to win!

On whichever two of the three pastoral nines (Lake, Meadow, Ridge) you prefer, you will face large fairways, but also a problem: play away from the hazards (bunkers, water and environmentally sensitive areas) or ask for them to set up an easier ensuing shot? Panelist Tom Ierubino lauds the closing three holes (Nos. 7, 8 and 9) on the Lake Course. They offer a nice mix with a short dogleg-left par-4, followed by a long par-3, and finishing with a par-5 that plays first downhill, then uphill. A dividend, says Ierubino, is that the practice tools give you the materials to work on your game like a pro.”

As its name indicates, this links-style layout gives you a feel of the exotic, capped by sheltering sands and variable breezes. “Shotmaking is necessary because of the bunkers, waste areas, elevations and fescue. To say nothing of the forced carries to the dance floor, as at the 410-yard No. 14. Still, notes Canal, the course is very fair, with wide fairways and large greens. Other mitigating factors: The amenities are nice and the staff is very friendly. Just cool- this is how panelist Sean Fitzsimmons describes this history-soaked course, host to three U.S. Women’s Opens and most recently redesigned by Tom Doak in 1999. The alleged birthplace of the term “birdie” can be stingy in yielding them; its comparatively modest length relies on the staunch bunkering of many greens and the stiff winds to hone its claws. “The course opens with a long, demanding par-5,” says panelist Fred Behringer, “and closes with a notable par-4 leading to the clubhouse,” whose old-school interior is spartan wood. On the back nine, savor the spectacular views of Atlantic City across the bay. 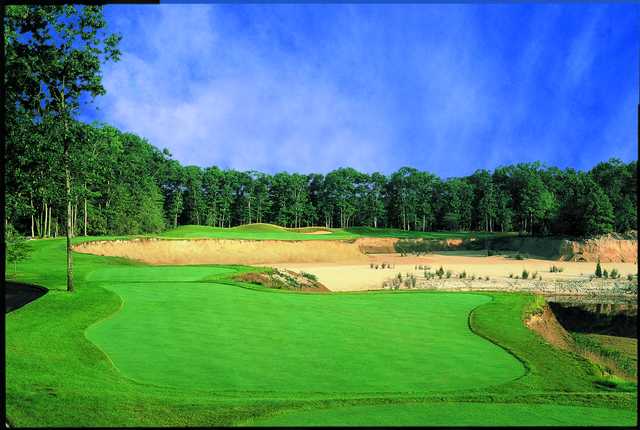 The sand quarry on which Scotland Run was created is much in evidence at what panelist Merrell Noden terms the “wildest and wooliest” layout of our Top 10. “The front isn’t so dramatic, but it’s a good warm-up for the back,” he says. Then, hang on. “The back nine has one mind-blowing hole after another,” Noden says, citing “raised greens fronted by walls of railroad ties, blind shots, and at No. 16, a risk-reward par-4 where you drive over the biggest trap I’ve ever seen. The last time I played it, there was literally a crashed small plane at the bottom of this bunker.” You’ll find solace in the club’s “good food,” Noden says.

Sister club at Crystal Springs Resort to Ballyowen and similarly picturesque, Wild Turkey has two looks: ridge and basin. The latter includes much of the back nine, which has a panoramic arena feel. The two most dramatic and dizzying holes are one-shotters: The par-3 10th is a 218-yarder that drops straight down. (Play it about 20 yards less than it says on the card, and factor in wind.) “On the tee you feel like a skydiver poised to jump into the void, hoping to land on this postage stamp below,” says panelist Eric Levin. Tough forced carries (as over water at the other signature par-3, the 7th) are offset by wide fairways and landing areas, making Wild Turkey a sweeping test you’ll enjoy taking.

Tucked alluringly like a sucker pin in northwest New Jersey’s Highlands region is a golfing Brigadoon. Literally and figuratively, Ballyowen is on a plateau. The elements-style layout is not the longest course you can play in the Garden State, nor the most iconic. But it is certainly the damnedest—and the most intoxicating.

The first thing you see when you approach on Wheatcroft Road (blink and you might miss the turn) is that the 250-acre tract is all but treeless—wide open. Do not be fooled. In summer, when the dry is up and the fescue could graze the outstretched hand of a Parkway toll taker, you’d best pack a mess o’ balls. There are 71 bunkers, usually in the most diabolical spots. Dunes and mounds often have you shooting blind. Fairway hummocks produce uneven lies. Random elevation changes, especially on approach shots, make the yardage on the card moot. The shallow green of the par-3 No. 6 pinches your choices: Take enough club to make it over the water in front, but not so much you land in the gnarly gorse in back.

The main challenge is the sinuous design. Ballyowen’s longer holes, notes panel member Lisa Lifer, “mix bombs-away with target golf.” Looking from the tee of the par-5 10th, you face a long carry to the diagonally positioned fairway, which moves left and downhill. Long-hitting righties will be attracted to aim a left-curving draw over the bunkers to cut the corner and set up a simpler second shot. Pull it off, you are rewarded. Come up short, you’re in purgatory.

Many players point to No. 7, a 473-yard, dogleg-right par-4 with water hugging the right side all the way to the hole, as Ballyowen’s most breathtaking. “It requires a good drive, which still leaves you with a mid-to-long approach, a special challenge when the flag is on the right,” says Lifer. Only one hole—the par-4 14th—can be vaguely labeled as “straightforward.” But as Lifer says, “even with a good drive, the approach is long and can be a blind shot. You have to have faith in your alignment and go for it.”

It doesn’t get easier when you pull out the putter. While not necessarily quick, the greens often are large, multitiered and filled with subtle swells and breaks. On the par-5 17th, if you land on the upper-left part of the surface and the pin is front right, you’ll need to negotiate a humpback. Putt just past the crest, and gravity may take the ball to the hole—or past it. So there’s a premium on placing the ball on the correct level. Lots of luck!

Perhaps the major challenge (besides maintaining a vigilantly enforced 4 1/2-hour pace of play) is to not get distracted by the surroundings. From the high 14th green, you spy a glorious panorama of flags whipping (yes, it gets windy with so few trees) on half a dozen holes. At sunset in the summer, a bagpiper skirls next to the handsome clubhouse, whose restaurant serves half a dozen beers on draft. Like the single-malt Scotches stocked there, Ballyowen may take more than one sip to fully appreciate. But we bet you’ll be back for another taste. 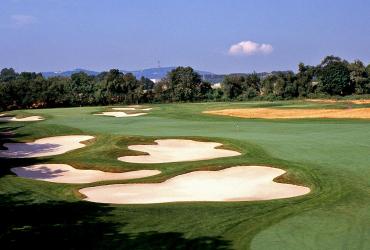 The conceit: Each hole is built in the style of a classic designer (Banks, Ross, Tillinghast, et al). “The course flows together in a way that a golfer unaware of the concept might not even notice,” says panelist Harry Goett approvingly. Architects also breaks you in gently, with two medium-length par-5s: uncomplicated, 509-yard, pot-bunkered No. 1, in the manner of Old Tom Morris, and strategy-filled, 521-yard No. 3, styled after Hugh Wilson. Goett favors yet another par-5, No. 13, on which a creek fronts the green—as it does at Alister MacKenzie’s 13th at Augusta National. Except you can’t play the Masters at these rates: a reasonable $99 on weekends.

Beautifully maintained for such a heavily played track, hallowed Hominy “is a bombardment of the golf senses,” declares panelist Tom Pranio. “Hardly any shot is uncomplicated, and even on the par-3s, the greens are large and tricky enough to give the average player fits and the better player cause for concentration. When you hit it in the rough, it sometimes takes Herculean feats of strength to liberate yourself.” Three of the course’s toughest holes are par-5s (in escalating order of difficulty, Nos. 17, 4 and 14), all of which get testier when the breeze comes from the south.

As well groomed as the members’-only West Course, the East Course (the public half of Royce Brook’s 36-hole complex) offers tree-lined as well as open-meadow holes—and a fascinating variety of problems to solve. Tom Ierubino points to Nos. 7, 8 and 9: a double-dogleg par-5, a picturesque par-3 whose tee shot must be hit through a wooded chute to a large green, and a dogleg-left on which the golfer must decide how much of the rough to carry to reach the fairway. The bunkers are many and large. However the course treats you, at the end you return happily to a superb clubhouse with excellent food. As well groomed as the members’-only West Course, the East Course (the public half of Royce Brook’s 36-hole complex) offers tree-lined as well as open-meadow holes—and a delightful variety of problems to solve. Tom Ierubino points to Nos. 7, 8 and 9: a double-dogleg par-5, a beautiful par-3 whose tee shot must be hit through a wooded chute to a large green, and a dogleg-left on which the golfer must decide how much of the rough to carry to reach the fairway. The bunkers are many and large. However the course treats you, at the end you return happily to a magnificent clubhouse with great food.

There you have it, a list of golf courses you can visit and play golf with your friends or family members. For sure, you will check out one or two of the above listed golf courses. Have fun playing.