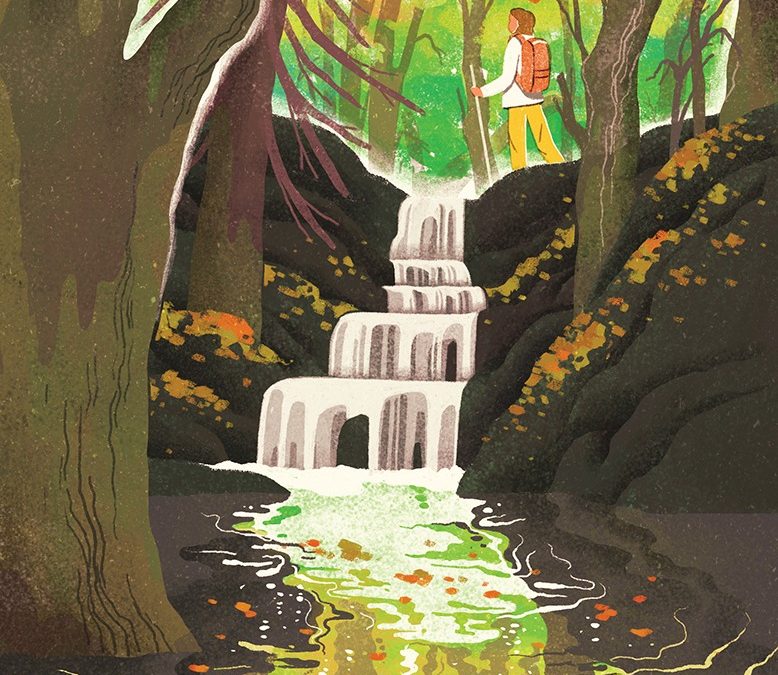 How the Pandemic Got Me Into a Garden State of Mind “Why do they call it the Garden State?” I wonder aloud the first time my future husband takes me to his childhood home in Flemington.

He waves out the window as we travel on Route 202. “There are horses and cows! And cornfields,” he says. It’s picturesque, but not enough to dislodge this New Yorker’s indelible idea of Jersey as little more than the gray Turnpike and Newark Airport sprawl.

A dozen years later, we’ve bought a house in Montclair—12 miles west of the Lincoln Tunnel and one door away from the NJ Transit commuter line. There’s the leafy Mills Reservation nearby, but our house shakes when the trains pass. We vacation down the Shore, where beach houses stand neck to neck on stilts, and the Garden State moniker still seems unearned.

It’s Covid-19 that finally removes my blinders. Banned from the gym and parks, I look out my suburban windows and wonder what adventures and exercise I might find without wandering too far from home. Early in the pandemic, we trail through autumn woods with our son and his fiancée, and our spirits lift. One-hour hikes around the South Mountain Reservation’s Hemlock Falls in West Orange turn into afternoons exploring dense paths and carriage roads, dogs in tow.

Friends and family learn our little pod is up for adventures and suggest new destinations, which is how we find ourselves staring open-mouthed at a warning sign posted at the gated entrance to Apshawa Preserve in West Milford.

“That’s scary,” I say, grimacing at a huge photo of a ferocious black bear.

We consider turning back, but what we’re really searching for is a day of forgetting we are scared to death of the virus, and so we go, singing loudly to keep the bears at bay. We feel braver for it when we reach the Butler Reservoir falls.

We take kayaks to the Paulinskill River, east of Marksboro, paddling and portaging over fallen trees until we can’t stand up from laughing. When winding country roads lead our less intrepid friends to panic, we’re not scared of the unknown—we’re excited. We plan outings further afield, and even wilder.

“Not all who wander are lost,” we add to our mantra.

We acknowledge what we cannot control by surrendering to the untamed woods of Warren and Sussex counties and the wilds of the Appalachian Trail. There’s the mossy glade where we find a swimming hole and never want to leave.

When Omicron prompts us to cancel our December trip to Sedona, my daughter and I explore the State Line Lookout in Alpine and hike the Palisades Park along the Hudson River. Then we discover Stokes State Forest in Sussex County, as deep and green as the Adirondacks.

“This isn’t what I expected,” I admit as we stand atop Buttermilk Falls in the glow of a Garden State sunset. “It’s better.”

The post How the Pandemic Got Me Into a Garden State of Mind appeared first on New Jersey Monthly.

For the sixth year in a row, Jersey City has been named the most diverse city in the United States. Personal finance website WalletHub compared more than 500 of the largest U.S. cities examining each city based on ethnicity/race, language, and birthplace.

Jersey City scored an Ethnic Diversity Score of 72.69, which was followed up the towns of Germantown and Gaithersburg, both in Maryland. The town scored 72.54 and 72.5, respectively. Neighboring New York City came in sixth with a score of 69.45.

At Height of Fame, Sharpshooter Annie Oakley Moved to Nutley

At the height of her international fame, the petite, Ohio-born sharpshooter, whose real name was Phoebe Ann Mosey, and her husband, Frank Butler, moved to the Essex County town when she was 32 years old.

In December 1892, Oakley purchased a lot at 304 Grant Avenue. A year later, the couple moved into a newly built, three-story house. The Victorian residence, with patterned shingles, a front porch and a corner turret, was Oakley’s first permanent home, underscoring how well compensated the champion markswoman had been for her rifle performances (estimated to exceed $3,000 per week in today’s dollars). The couple paid $1,800 for the house.

The Nutley community was an idyllic respite for Oakley after years spent living in tents, hotels and rooming houses on tour. Around town, Oakley, who was nicknamed Little Sure Shot by Sitting Bull, was simply known as Mrs. Butler.

Her first major public appearance in Nutley took place on March 27, 1894, at the Nutley Amateur Circus’s special fundraiser to establish a branch of Clara Barton’s Red Cross League there. The event featured prominent residents as amateur performers, and there was a sold-out crowd that included New York society.

Months later, Oakley visited Thomas Edison’s motion picture production studio, the Black Maria, located only a few miles away in West Orange. Dressed in a fringe cowgirl costume, she repeatedly fired her Winchester rifle at glass balls thrown in the air by her husband. The performance was preserved by Edison’s innovative kinetograph, an early motion picture device. It even captured the gun smoke and shattered debris.

“Annie Oakley could hit anything with a gun that anyone else could, and then some,” asserted Mark Twain at the time. Oakley achieved the bull’s-eye of success “with her trusty rifle and steady arm,” according to one newspaper, rising to the top of the male-dominated world of competitive shooting. She became a celebrated role model for young women. After 12 years as Nutley residents, the Butlers sold their Grant Avenue house in 1904. A neighbor bought the property for “one dollar and other valuable considerations.” The Butlers returned to the area on several occasions and remained in contact with townspeople. Even though Oakley had moved from the township more than twenty years prior to her death in 1926, she named a Nutley friend as an executor of her estate.

The house that belonged to Annie Oakley was demolished in 1937, yet the Wizard of the Winchester is immortalized in a mural titled The Return of Annie Oakley, by Paul C. Chapman, which has hung above the superintendent’s door in the Nutley Post Office since 1941.

The large oil painting, which was commissioned by the Federal Arts Program of the New Deal, was painted in 1940. It depicts Oakley on a galloping horse, firing her rifle along with five Native Americans, two cowboys shooting pistols, and Buffalo Bill with a raised hat saluting “the best rifle shot in the world.”